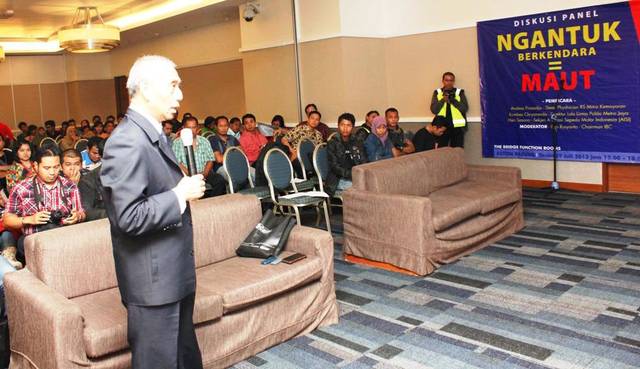 Jakarta – Indonesian Motorcycle Industry Association (AISI) supports the effort to reduce the number of accident during mudik (homecoming tradition of Indonesian people during Eid) through socialization to motorcycle club and communities SUB.

Jakarta – Indonesian Motorcycle Industry Association (AISI) supports the effort to reduce the number of accident during mudik (homecoming tradition of Indonesian people during Eid) through socialization to motorcycle club and communities.

Doctor Andreas Prasadja stated that human factor dominates the cause of traffic accident in Indonesia; besides other factors such as road condition, vehicle, and nature. Being sleepy is one of the human factors. Being sleepy on riding has the potential to cause accident during mudik activity. “Sleeping can be the factor of someone cannot concentrate on riding. Sleeping is the only way to cure sleepiness,” Andreas Prasadja said.

Sub Director of Security and Safety of Jakarta Police Traffic Directorate AKBP (Pol) Irwan Prawira Satyaputra stated that the accident in 2012 was dominated by motorcycles; about 7.241 or 58% from whole accidents. Furthermore, his institution encourages people for not using their motorcycles during mudik activity to reduce accident fatality.

In responding this problem, AISI Chairman Gunadi Sindhuwinata stated that not only human factor but also road infrastructures that could be the cause factor of accident. He considers that road infrastructure in Indonesia is still less proper. “We do not have a shared vision in how giving proper, correct, and precise mobility facility to people which is also safe and comfortable. However, government still has less attention about it,” He said.

Secretary General of AISI Hari Sasono added that motorcycle industries have efforts to reduce the number of accident by conducting “mudik bareng” (the activity of homecoming participated by big number of people together) by the concept of delivering the people by bus and delivering their motorcycles by truck.

As part of social responsibility, motorcycle producers also provide posts which can be used as rest area for the people who do mudik activity. Moreover, before and after mudik period and during Eid holiday, motorcycles producers also prepare the post and workshop which are always standby to serve consumer in repairing their motorcycle.